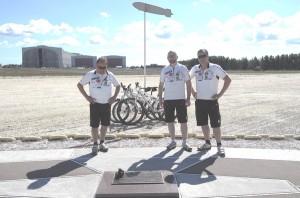 Enlarge image Hinterländer Mountainbiker at the Hindenburg Memorial (© Hinterländer Mountainbiker) “Learning about traces of German heritage in the USA by bike” is the motto of Ulrich Weigel, Jörg Krug and Harald Becker during their trip through the USA. These three highly motivated mountain bikers came all the way from Germany with their beautiful bikes which were designed especially for their long planned US-bike tour.

The goal of this trip was to explore German traces in the USA, especially those in New York and New Jersey. For this purpose, the three bikers brought not only their spectacular bikes to the U.S. but also the original Hindenburg Camera. With the Hindenburg Camera, they wanted to visit the Hindenburg Crash Site in Lakehurst (NJ) and experience the atmosphere of the tragedy that happened in 1937. With the help of the German Consulate General it was possible to organize a trip through the Hindenburg’s history, making their wish become a reality.
The three German Mountain bikers were able to take a private tour of the Hindenburg Memorial in Lakehurst. Arriving at the Hindenburg site, Ulrich, Jörg, and Harald were moved by seeing the tragic site where the German passenger airship Hindenburg (LZ-129), which carried hundreds of passengers and traveled thousands of miles, was destroyed in a tragic fire on May 6, 1937 at NAS Lakehurst. Measuring 803.8 feet in length and 135.1 feet in diameter, the German passenger airship Hindenburg (LZ-129) was the largest aircraft ever to fly, and the commercial flights of Hindenburg pioneered the first transatlantic air service.
The three bikers then took the piece of history of this tragedy out of their bag – the original Hindenburg camera and this, for sure, was a moving moment as old emotions and the tragedy of 1937 came up.
Ulrich, Jörg, and Harald also visited the Air Church, where they were shown memorial plaques honoring the victims of this tragedy. They also remarked that they were able to recognize some names of survivors.
By the end of the tour, after having taken great photos, the three bikers were satisfied with the successful tour. Their tour guide was also very pleased to welcome such special and rare guests to the Hindenburg Memorial and enjoyed also being able to see the original Hindenburg camera. It was a win-win tour!
Before coming to the East Coast, Ulrich, Jörg and Harald explored traces of German ancestry in California.